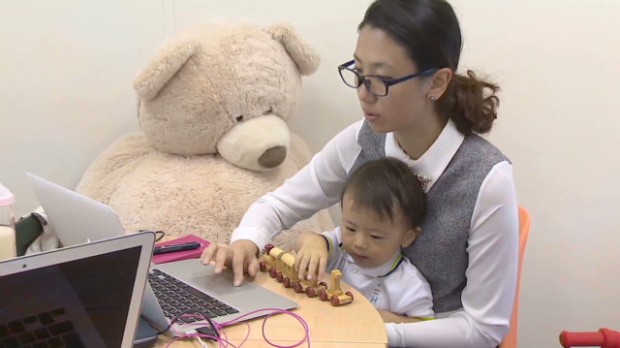 The Japanese economy slipped into recession in the third quarter, a surprisingly poor performance that could delay a planned sales tax hike

Gross domestic product shrank by an annualized 1.6% in the three months ended September, Japan's Cabinet Office said Monday. The result was much worse than the 2.2% expansion expected by economists.

On a quarterly basis, Japan's GDP declined by 0.4% as business investment slipped. Economies are commonly described as being in a technical recession after two straight quarterly contractions.

The disappointing result comes as Japan faces a full slate of questions over tax policy and the country's plan for economic revival -- dubbed "Abenomics."

Japan's consumption tax was increased to 8% in April in a bid to improve the country's fiscal position, and the government is now agonizing over whether it should implement an additional bump to 10%. The first increase set off a boom and bust cycle that wiped out growth in the second quarter, as consumers drastically changed their spending patterns.

The price of a sugar high in Berkeley, Calif., is about to get higher.

Voters in the city approved a 1-cent-an-ounce tax on sugary sodas and energy drinks, according to unofficial results released by local officials.

That adds about 12 cents to the price of a can of soda and about 68 cents to a two liter bottle.

Across the bay in San Francisco, a similar measure didn't receive enough support to pass.

Results showed the Berkeley measure won 75% of the vote.

It was backed by a variety of groups from the Berkeley Dental Society to the local chapters of the NAACP and teachers union. The Berkeley City Council and school board also backed the measure.

They argued most of the opposition came from interest groups tied to soda manufactures, such as the American Beverage Association.

That trade group issued a statement Wednesday that did not directly mention the Berkeley vote, but said it is making a voluntary effort to cut calories consumed in drinks by 20% per person by 2025, including offering smaller portion sizes and more low and no calorie drinks.

"These efforts are in place, working and will have an impact far greater than a tax ever could," said the trade group.

Other opponents argued that the measure, which exempts 100% juice drinks, chocolate milk and diet sodas as well as some retailers who pick up beverages outside of city limits, "has too many loopholes, too many exemptions and too few safeguards."

"We can't tax our way to health with a measure that provides absolutely zero accountability in terms of how the revenue is spent," argued opponents.

The similar measure in San Francisco would have imposed a 2-cent-a-ounce tax. It received support of nearly 55% of voters there, but fell short of the two-thirds super-majority vote needed for passage.

U.S. unemployment is down. Consumer confidence is up. Inflation is low

Things are improving, yet Americans are still worried. The economy is voters' top concern ahead of the midterm elections next month, ranking ahead of national security, according to a recent Politico poll.

Only 42% of those surveyed by CNN late last month thought the economy was in good shape. While that's the highest share since January 2008 and an improvement from the 29% who felt this way a year ago, it's still weak overall.

Let's take a look at what's going right: The unemployment rate is below 6% for the first time since 2008. Job openings are back to 2001 levels. Consumer confidence is at its highest point since before the recession, and inflation remains a tame 1.7%.

Related: What do women want in a husband? A job!

Sounds great, but it's taken the country a long time to get to this point, said Richard Curtin, chief economist of the Thomson Reuters/University of Michigan Survey of Consumers.

The recovery has also been stronger for some than others. Young adults are still having a tough time starting their careers, while older Americans are having difficulty shifting into retirement after their nest eggs were destroyed during the Great Recession.

"It's taking so long to recover and it's been so uneven," he said. "It's been more than five years since the end of the recession."

Although the unemployment rate has fallen rapidly in the past two years, it remains at a relatively elevated level, said Justin Wolfers, a senior fellow at the Peterson Institute for International Economics. The average jobless rate in the decade before the Great Recession hit in December 2007 was 4.9%.

Americans also don't feel any better off. While more people may have jobs, they aren't bringing home fatter paychecks. Wages and income have remained stagnant for years, making it tough for folks even though inflation is low. Median household income, which stood at $51,939 last year, is back to 1995 levels

Startups to hire most freshers at IITs this placement season

MUMBAI: Flush with a record billion-dollars-plus raised during the first nine months of this year, dozens of startups are making a beeline for IIT placement season set to kick off in December this year.

Already, the number of startups who have enrolled for the campus placement season this year has doubled or trebled at many IITs, according to campus sources.

For example, IIT Madras which had only seven startups last year, expects at least 30 to come calling this year. "Over 14 startups have already registered, out of which 11 will hire exclusively from us," Vishranth Suresh, academic affairs secretary, IIT Madras, said. Similarly, at IIT Kanpur, 35 startups have already registered for this placement season, with the final tally expected to cross 45. Only 24 visited the campus last year.

The presence of such a large number of cash-rich startups will cause a fierce talent war with well-known recruiters like Google, Oracle, Samsung, Schlumberger and Goldman Sachs for the best among the 9,000-plus students who will graduate from 16 IITs next year. Many startups are first-timers at the IIT placements. Two-to-four-year-old companies are offering Rs 12-15 lakh pay packages, on a par with salaries offered by core companies and IT firms, a placement coordinator at one of the older IITs said.

Campus and industry sources believe startups could upstage larger companies. "Startups are the ones providing problem-solving opportunities that can have an immediate impact to students early on in their career," Sandeep Murthy, partner at venture capital firm Lightbox Ventures, said.

"Till a couple of years ago, the pecking order for an IIT student was an MNC, then a product development company and finally, an IT firm. Now, because of the job exposure, competitive salary and challenging work environment, startups are on a par with MNCs," Sharad Sharma, angel investor and co-founder of iSpirt, a think tank for software product companies, added

Investors are running away from stocks as fast as they can

The Dow plunged more than 350 points shortly after the opening bell Wednesday while the S&P 500 and Nasdaq each dropped more than 2%.

Stocks rebounded later in the morning but the sell-off worsened as the day wore on. The Dow was down more than 400 points by mid-afternoon.

Strangely enough though, it seems that investors are still bullish on America in spite of the market volatility. They are doubling down their bets on U.S. Treasury bonds.

The rate on a 10 Year Treasury plunged Wednesday morning to 1.86% -- its lowest level since May 2013. Yields fall when investors are buying bonds.

The yield moved back above 2% later on during the day. So rates still have a relatively long way to go before they approach their all-time low of 1.39% from July 2012.

Bond investors do the safety dance. So why the heck is everybody rushing into bonds?

One word: Security. The United States still seems to be holding up better than Europe and Japan. Concerns about China's economy losing steam are also making the U.S. look more attractive.

And with worries about Ebola and ISIS roiling the stock market, traders need someplace to put their money -- besides burying it in the backyard or sticking it under a mattress.

"Lower rates are not a result of fears about the U.S. economy," said Mchael Arone, a chief investment strategist for State Street Global Advisors. "This is a flight to safety. Investors had been much too complacent until recently."

The big drop in rates is a bit curious though given that the Federal Reserve is about to end its long-running bond purchase program, a policy known as quantitative easing or QE.

At the beginning of the year, many experts thought that the 10 Year Treasury could finish 2014 with a yield of more than 3%. Some thought 4% wasn't even out of the question once QE was over.

What appears to be happening is that foreign investors are still buying massive amounts of U.S. debt. China and Japan each hold more than $1 trillion in U.S. Treasuries.

Could rates fall even further from here? Yes.

But the bottom would probably have to fall out of the U.S. economy for Treasuries to hit a new record low.

Low rates aren't always a good sign. Keep in mind that while rates are extremely low in the U.S., they are even

Right now there’s some very real downside risk to the stock market if there’s no hint of new quantitative easing at either the Federal Reserve’s Jackson Hole meeting at the end of the month or the Fed meeting in September. The minutes of the last Fed meeting show hat many members want QE3, so they will in all likelihood announce yet more easing because that’s the only tool they’ve got left in their box. They are like someone who has only one tool — a hammer — and so they use that tool for all situations. The world is like a nail, and so they are certainly going to ease. They can’t lower rates anymore, so that’s what they’ve got to do.Hedge fund managers say there’s the probability of a melt up in the gold price if there is any move toward quantitative easing at either event, and gold has already started moving upwards, which is why I’m writing.

Complicating matters, on September 12, Germany’s Supreme Court will decide whether Germany can continue to put funds in the Euro stability pact, bailout programs, and thus whether there will be a Euro bond program and whether the Bundestaag will lose control of their own government. How the court decides can affect the future of the Euro because Germany is holding everything together, and if Germany is no longer there then there is no Euro. The effects will be tremendous.

Carmen Reinhart and Kenneth Rogoff, in their excellent “This Time It’s Different,” wrote a book that should become a guide for all future policy makers. They examined the fate of countless nations in various types of financial crisis (internal defaults, external defaults, banking crises, exchange rate crises and inflation crises) and charted out the typical pattern of distress. They found that the unwinding of a financial caused boom usually entails declines in real housing prices (housing usually declines 35% over six years or more), bear markets in stock prices (which typically decline 56% over three and a half years or more), exploding government debt (usually an average of 86%), falling output, rising unemployment rates, collapsing tax revenues and spiking interest rates. What happens depends upon the type of crisis that occurs, with Reinhart and Rogoff finding that banking crises typically lead to sovereign debt defaults (there have been 250 cases globally since 1800), and sovereign defaults typically lead to inflation (greater than 20% per year) and currency collapses